The Importance Of Territory And Routine For Your Dog 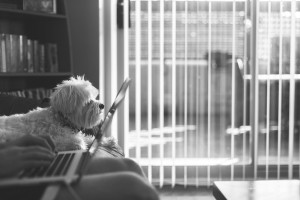 The following is a guest post by Sally Bell on the importance of routine and environment for your pets.

It’s often assumed that dogs will be excited and stimulated by new environments – that they’d far prefer a romp somewhere new than to patrol the same old boring paths. In a way, this is true – dogs certainly do spend a lot of time investigating new scents, and will go into overdrive when trying to assimilate a new place into their own mental map of their ‘territory’. But is this genuine ‘happiness’? All too often, we make the mistake of anthropomorphising our dogs – of assuming that their brains behave in the same ways that our do. Ok, they’re pack mammals – like us – who have evolved over centuries to seek out and cherish human company, so there’s a degree of mental overlap – but they are by no means human. At a dog’s basic core, the wolfish instincts reign supreme, and paramount within this bundle of instincts is the importance of territory. Sure, a dog is going to be excited when it experiences somewhere new – but the canine and human brains work very differently in this regard. While your dog may not be unhappy to be taken somewhere new, it’s – weirdly – likely that your canine companion would actually prefer to patrol the same, tired old routes that it’s come to know well.

Let us look at the physical landscape from the perspective of your dog for a moment. From a canine point of view, the landscape is not simply a set of sights and textures which exist in the moment – it is a smellscape, stuffed full of the information and communications of the things which have occurred there over the past few days. Your dog uses the landscape to communicate with other animals – particularly dogs – letting them know that it’s on the scene, and considers this area to be within its territorial range. Smelling its own scent marks and topping them up is reassuring to your dog, it lets them know that the territory is being guarded, and all is in hand. New places are exciting, sure, and any dog’s walking routine should have a little novelty mixed in, but getting to patrol the familiar old places where your dog likes to lay down his or her smell-markers is very satisfying to them. It gives them plenty of information (to which we are not privy) about what’s been going on in their ‘range’, and allows them to renew their claim upon the area – to pay their rent, if you need a human analogy! Furthermore, new places can be stressful for a nervous dog. In the wild, wolves who stray onto the territory of another pack are liable to be attacked. A dog which lacks the confidence and socialization to treat other dogs as potential friends will tap straight into these old fear-instincts when presented with an alien environment. When they’re not in the comforting presence of their owner, and taken to a completely overwhelming environment full of strange dogs such as a boarding kennels, any dog is likely to become stressed. Stress can be very bad for your dog’s health – giving your dog regular access to its familiar places and smells is a very good way of reducing your dog’s stress.

This isn’t to say that you should never take your dog somewhere new – far from it! Dogs certainly do enjoy (and, more to the point for many owners with bouncy adolescent hounds get tired out by!) new places. But you should not try to lay on something new for your dog every day, or they’ll start to get stressed out by the lack of routine, familiarity, and clear idea of what constitutes their ‘territory’. Furthermore, the novelty should always be grounded in a good deal of stable familiarity. Remember that your dog is not just secured in their landscape by familiar sights and sounds, but by familiar scents as well. It’s very important that your dog feels safe and secure in an environment which they know – and that they have the opportunity to keep renewing their scent within that environment. This lack of familiarity and lack of opportunity to connect with the territorial landscape is a major reason behind the stress many dogs experience in boarding kennels. Of course, all dogs are different, and some dogs will find the novelty and new scents of a kennels more exciting than stressful – but for other dogs it can be an intensely frightening experience. For these dogs, the stress of being without their beloved owners can be greatly mitigated by their being in their own, familiar home, eating their familiar foods, and following their familiar routines.