Thanksgiving Day 2013: Give thanks to those working on the Holidays! 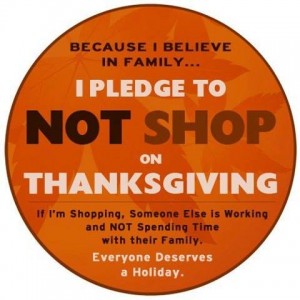 There is a lot of buzz around the fact that many department stores are opening earlier and earlier to get the jump on the Black Friday rush.  Many stores are opening earlier on Thanksgiving Day 2013, which is now becoming widely known as Brown Thursday.  Most notable of these is K-Mart, who is opened today at 6 am and will remain open for 41 hours until Friday night.  This has caused outrage from people who believe that Thanksgiving is a time to be spent with family.  One Facebook page, Say No To Shopping On Thanksgiving, boasts over 56,000 likes and their badge (pictured) has been shared over 972,000 times.Among some of the comments on the page:

There should be a law against these stores opening before midnight.

Retail during Thanksgiving is not a necessity

I will not give my holiday $$ to any store open on Thanksgiving.

From a personal point of view, I have no desire to brave the crowds on Thanksgiving to save a few bucks on a TV.  Nor would I have any desire to camp out for a bargain or get trampled in a WalMart.  However, for anyone who says that they would not give their dollars to any business open on Thanksgiving, it’s not always that simple. While this has only been taking place in big box retail for the past several years, the fact is many of us take for granted how many other people are working on the holiday.  As a former convenience store manager, I worked many holidays, including Thanksgiving and Christmas.  I ate turkey dinner brought into the store by customers and rang in the New Year in my store.  Now as the owner of  a pet sitting company, I am working, along with my sitters, to ensure that our client’s pets are well cared for.   And I am thankful for the opportunity to do so.  While I would love to not have to go out, I know it’s part of the territory.  When other people are off on vacation or away for the holidays, we are working.

If you need a last-minute item that you forgot to pick up, it’s nice to know your local grocery store is open.  And although the Wednesday prior to Thanksgiving one of the busiest travel days of the year,  many who travel on the holiday itself are thankful to have a spot to fill their tank and get a snack.  If you’re travelling, hotel employees and airport workers are working.  For those who prefer not to do dishes after their meal, chain restaurants such as Cracker Barrel and Longhorn Steakhouse are open, along with many other restaurants that are already booked up for Thanksgiving dinner reservations.  People behind the scenes, such as disc jockeys spinning tunes at your local radio station and news reporters.  Essential personnel such as EMTs, policemen and fire fighters and school employees working the Turkey Bowl rivalries at the high school near you are also working.  Even the person that drives around in the middle of the night to deliver that extra large newspaper with all the black Friday ads is working.  The point is, it’s not hard to run into someone that is working today.   If and when you do, take the time out to thank them for working to serve you, while you enjoy your holiday.  And if you’re at a restaurant for Thanksgiving, leave an larger than normal tip for your server.