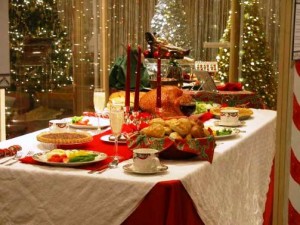 For many of us, Christmas is a time of hearty indulgence, during which we put aside our waistline worries and take liberal advantage of vast mountains of food (invariably telling ourselves that this time we really will burn off the calories in January!). Many of us extend this indulgence to our four-legged family members, lavishing extra doggy treats and love upon them. Some dogs may find the temptation of all the food around just too much, and take some for themselves. However, humans and dogs are quite different when it comes to consumption and digestion. Some things which are fine for us to eat are very bad indeed for dogs. It is sadly not uncommon for a well-meant treat or a dog-snaffled snack to transform what should be a happy family Christmas into a time of tragedy, and veterinary surgeries are always inundated with unintentionally poisoned dogs at this time of year. If you want to keep your dog safe, make sure that they are kept away from these common causes of Christmas poisoning:

Most of us are anecdotally aware of the fact that chocolate is bad for dogs, but few of us are aware of why. Chocolate contains a substance named Theobromine, which is similar to caffeine. Theobromine is a bitter alkaloid so, in general, the more bitter tasting the chocolate, the more theobromine it contains. Dark and plain chocolate is generally higher in theobromine than milk chocolate – but this by no means indicates that milk chocolate is safe for your dog! In humans, theobromine has an enlivening effect. It can be fatal – but a human would have to ingest an enormous amount of theobromine in a short space of time to die from it. For dogs, however, it is a different story. Dogs metabolize theobromine far more slowly than humans do, meaning that the substance has longer in which to work its poisonous ways. A small dog can die from eating as little as 50g of dark, theobromine-concentrated chocolate. In less concentrated doses, theobromine poisoning will cause explosive vomiting and diarrhea. Enough chocolate will cause arrhythmia and fatal heart attacks. Problematically, many dogs find chocolate as addictively delicious as humans do, and will happily guzzle any that they can find. If you think your dog has eaten chocolate, phone your vet. Theobromine poisoning can be treated, but time is of the essence – particularly if your dog is small and the chocolate was dark. Luckily, any good pet insurer should cover accidental poisoning, so you need not end up enormously out of pocket.

Raisins, sultanas and grapes are not only a common Christmas snack in their own right, they are also commonly found in Christmas recipes – particularly for families of British descent. Christmas pudding, for example, is stuffed full of both raisins and sultanas. While these are sweet, healthy treats for humans, they can spell serious trouble should your dog get hold of them. The toxic compound within these foods has not yet been isolated, but they’re well known to cause kidney failure – an extremely serious problem. Should your dog eat raisins, sultanas, or grapes, their survival will depend upon the size of the dog, the amount of poison ingested, and the speed with which you can get him/her to the vet.

You might be having a low-calorie Christmas, you may be trying to cut out sugar, you may be diabetic – there are many reasons why someone would opt for foods sweetened with the sweetener Xylitol rather than sugar. However, even a small amount of Xylitol can be very dangerous for your dog. Symptoms of Xylitol poisoning in dogs include lethargy, vomiting, stumbling and staggering. This progresses to seizures, and sometimes to fatal blood clotting and liver failure.

Indulging in a handful of nuts in front of the fire is a lovely Christmas tradition – but if you’re eating macadamias, be sure not to share them with your dog. While macadamia nut poisoning is not always fatal, it can make your poor pet feel very sick indeed, and many will require veterinary treatment to get over it. Symptoms include trouble walking, shivering, weakness, and depression. Large, healthy dogs who have not eaten too many nuts should get better of their own accord, but those who are weaker, smaller, or have eaten lots of nuts may need veterinary supervision while they recover.

In general, try to keep all tempting Christmas snacks out of your dog’s reach, and ensure that you’re only feeding dog treats to your dog!